The equipment will help speed up and enhance the accuracy of various breeding processes including seed preparation, data collection, data analysis and inventory management.

The CGIAR Excellence in Breeding (EiB) platform handed over digitization equipment to the Kenya Agricultural and Livestock Research Organization (KALRO) as part of ongoing efforts to modernize the public agency’s crop breeding programs. The handover of the equipment valued at roughly 9.2 million Kenyan shillings ($85,000) took place at KALRO headquarters in Nairobi on March 8, 2021. 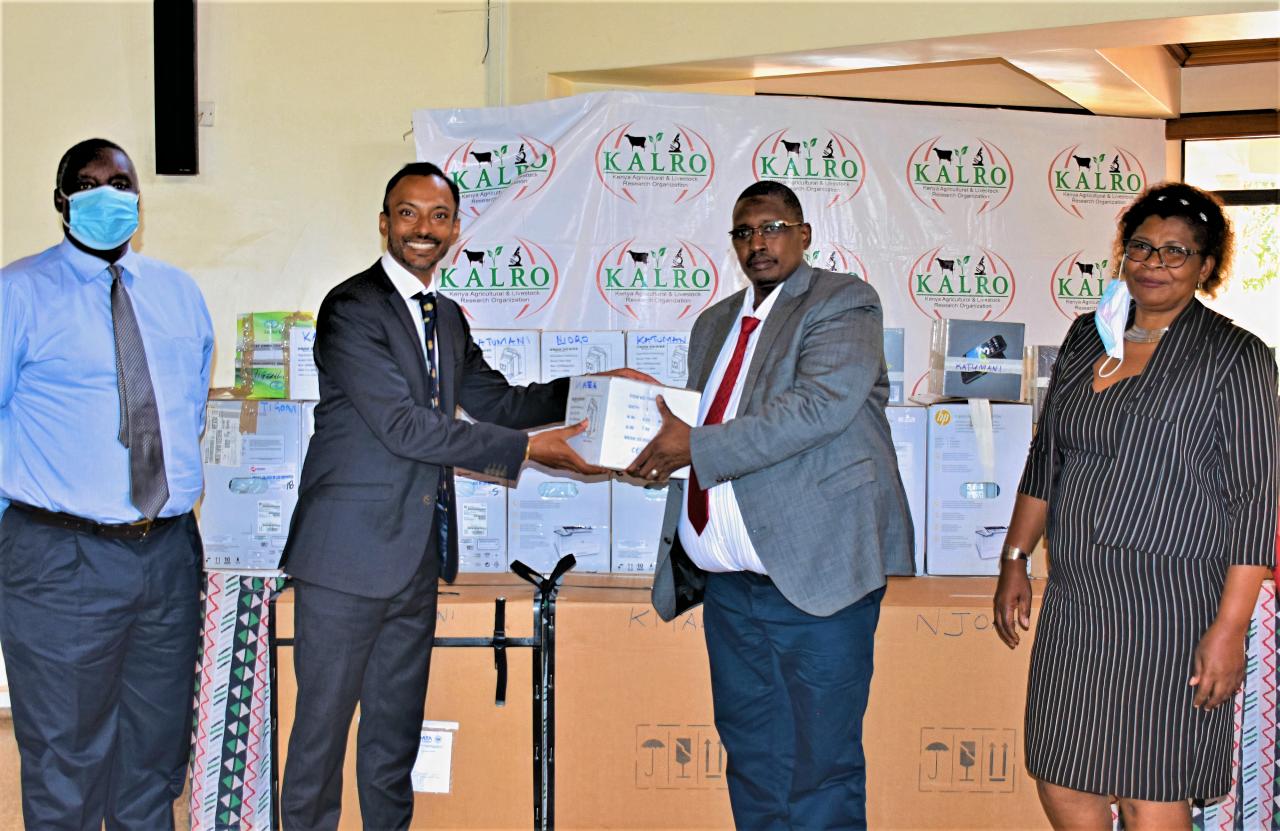 A lack of digitization equipment hampers research efforts of many national agricultural research systems (NARS) across Africa. This adverse situation is compounded by unreliable institutional memory, which constrains NARS efforts to breed an assortment of crop varieties efficiently.

He added; “With the availability of the equipment we are receiving, information and data can be recalled by a click of a button. The equipment will also significantly reduce research costs related to labor, thus freeing our scientists to focus on core research activities.”

The equipment will also supplement KALRO’s ongoing efforts to digitize its historical data especially for the maize and wheat program using the Breeding Management System (BMS). So far, 20 years of maize historical data has been uploaded onto the BMS platform for ease of access. At the event, Mable Mulanya from the Integrated Breeding Platform (IBP), an EiB partner, demonstrated how some of the digital gadgets work. She will spearhead the training of KALRO breeding programs on how to use the equipment.

The CGIAR EiB platform was established in 2017 to help modernize public breeding programs in the CGIAR and National Agricultural Research stations to increase their rates of genetic gain. In recent years, there has been an upsurge in challenges including climate change, population growth, rapid urbanization, changing dietary inclinations, transboundary movement of pests and diseases. These have exerted an enormous strain on food production systems. The challenges have elicited the urgency to prioritize the adoption of new plant breeding techniques and technologies to address current and emerging threats. This calls for a holistic approach to tackle the issues including better agronomy and policy, according to EiB NARS Coordinator Biswanath Das.

As part of its commitment to supporting NARS partners, EiB provided over 10 million Kenyan shillings ($92,000) of material and in-kind support to various KALRO breeding operations in 2020. This included genotyping support for maize and wheat, support to adopt the BMS digital data management system, technical support and training of KALRO breeders.

Much of the digitization work is driven by EiB's Operations and Phenoytyping module, led by Gustavo Teixeira, who said, "we'll continue to consider a whole range of devices and solutions. It's a part of our culture of continuous improvement, so breeding programs can focus on what really adds value to their clients."

EiB will continue to support NARS across Africa and beyond to digitize their operations, and is working with partners to secure more equipment, training and resources. With this Digitization project, EiB has targeted 24 breeding programs in 14 countries in Africa. These include programs run by AfricaRice, CIMMYT, IITA, IRRI, CSIR-CRI, CSIR-SARI, KALRO and NARO.

"We want to do more to support centers to improve their operations so they can achieve the most effective and cost efficient phenotypic processes - agronomic practices, seed processing and other areas," added Teixeira. "We aim to expand to more programs and partners."

Written by Joshua Masinde, CIMMYT Communications, with editing from Adam Hunt and the EiB team.