A common vision for CGIAR breeding backed by funders, with a view to One CGIAR 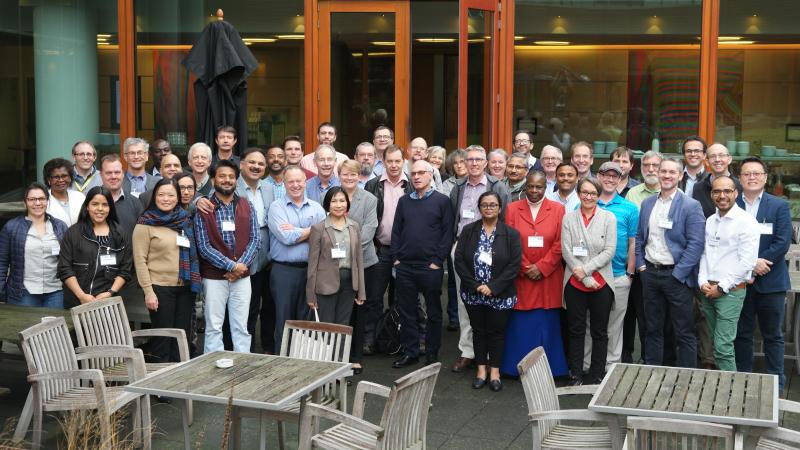 At its 2019 annual meeting, the CGIAR Excellence in Breeding Platform outlined an ambitious vision for breeding program modernization designed to deliver on the two key metrics demanded by the donors behind Crops to End Hunger: greater rates of variety turnover and genetic gain in farmers’ fields.

Whereas previous EiB annual meetings included technical breeding personnel, being the first such gathering of experts across CGIAR, this year brought together leaders from 13 CGIAR and NARS research centers, in addition to representatives from four major funders and five private sector representatives. 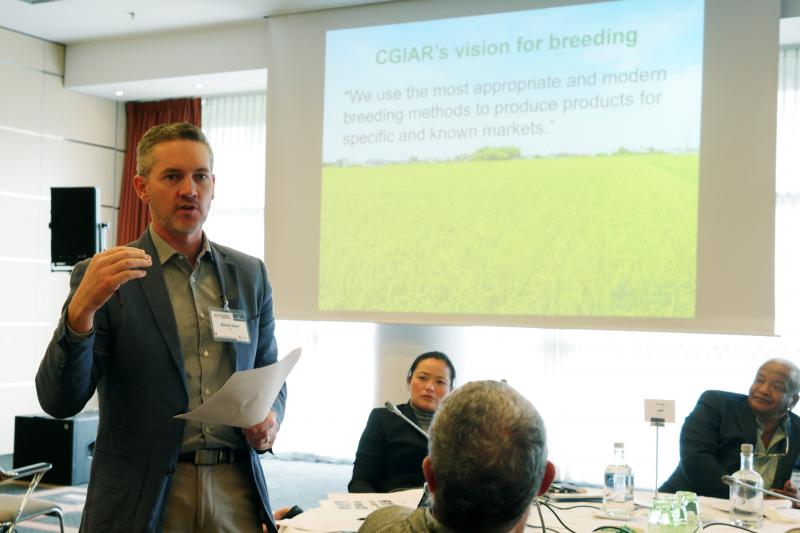 “You and your teams are drivers and leaders of the international public breeding community,” said Michael Quinn, EiB platform director, in his opening address outlining a detailed vision for the modernization of CGIAR breeding programs. “We ask that you view EiB as a partner, promoter and supporter of what you do, and as a resource to facilitate that work.”

The Vision for CGIAR breeding, based on two years of engagement with CGIAR, NARS, private sector and the donor community, details eight key pillars of a world-class breeding program. The vision provides a destination that guides the continuous improvement approaches within the CGIAR and NARS breeding programs. By assertively moving toward the components within the vision framework, the breeding programs will increase their capacity to deliver impact to end-users and consumers in lower- and middle-income countries.

Marco Ferroni, CGIAR system management board (SMB) chair also highlighted the urgency of change and support from the highest levels. “Global agriculture faces huge known and unknown challenges going forward that will not be solved without, among other aspects, the keenest, most modern and appropriately organized and resourced approaches to plant breeding that we and others in this business are capable of,” said Ferroni. “I applaud the vision statement on excellence in breeding in CGIAR that EiB has developed, and I assure you of my personal and the SMB’s support for your work.”

In an open session, CGIAR leaders then had the opportunity to reflect on the scope of the vision and the obstacles to achieving it, while a panel of representatives from the key funders behind the Crops to End Hunger (CtEH) initiative to accelerate and modernize the development, delivery and widescale use of a steady stream of new crop varieties also expressed their support. 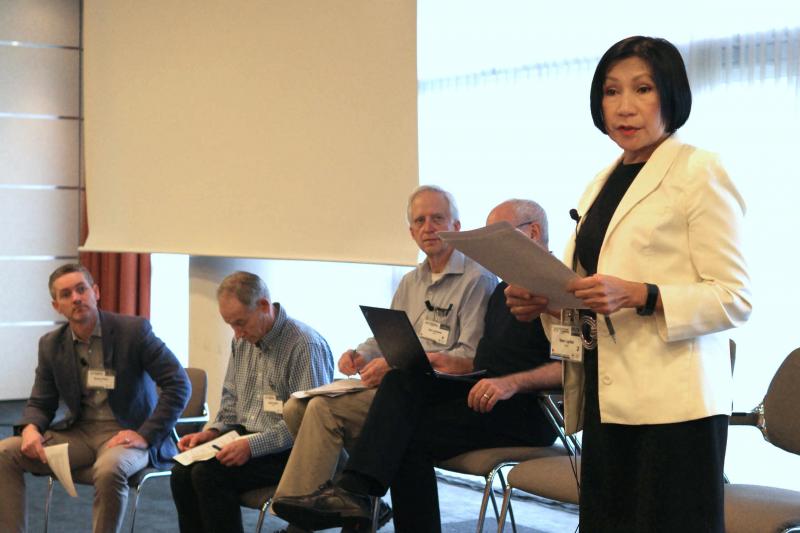 Nora Lapitan (USAID), presents alongside a panel other funder representatives

“The vision covers all the technical aspects, but more than that, it included the cultural change that is really key to making this change happen,” said Nora Lapitan (USAID). “More than the survival of CGIAR breeding programs, what is truly at stake is the impact that Crops to End Hunger could have in the lives of smallholder farmers and poor consumers, and so I’m continually inspired by the stories that come from your work.”

"EiB is really driving the modernization and is a very important part of the initiative," added Lapitan. "I see very important roles coming from the CGIAR leadership in overseeing what is being delivered by the breeding programs, and it is really the breeding programs which are driving what is accomplished, and the funders are there to provide guidance. I see moving forward that this can only happen with greater collaboration."

As Gary Atlin from the Bill & Melinda Gates Foundation (BMGF) highlighted, Crops to End Hunger should result in funding being more strategically deployed towards achieving the Sustainable Development Goals, rather than dispersed among disconnected projects. "The critical step that we took among DFID, USAID, Gates and GIZ, was that we now have among these donors something like 80% of the total CGIAR crop improvement budget," said Atlin. "We now have a fairly consistent understanding of what we are trying to do."

"The sheer unity that we're seeing among the donors is just awesome," remarked Josh Cobb, of the International Rice Research Institute (IRRI). "The single biggest problem that we face is this fragmented funding model."

The next section of the meeting was dedicated to addressing the cultural barriers to achieving the vision, and how CGIAR leaders can act as sponsors and create the conditions for change to happen. "You cannot over-communicate," was one of the key pieces of advice from Jonathan Shaver (Envision Partners LLC), who conducted the plenary session on change management. 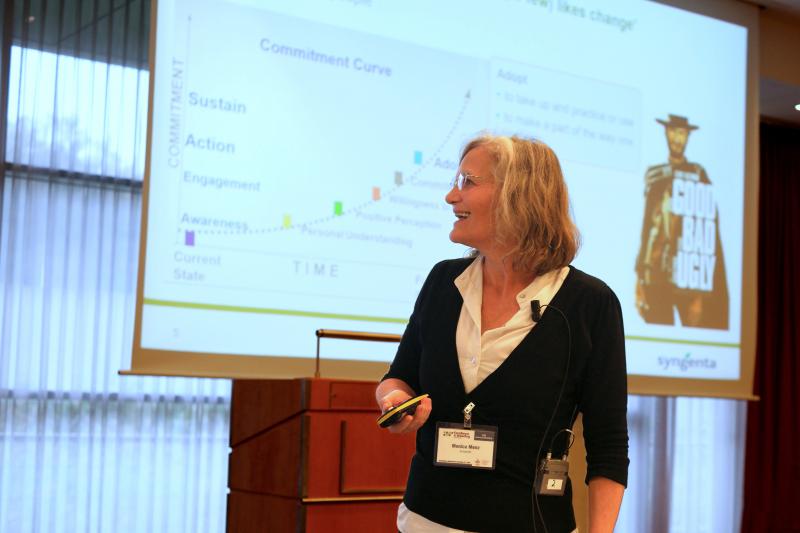 A panel of leaders from the private breeding sector shared their experiences of change and reflected on the challenges facing CGIAR, with a keynote speech in which Monica Menz (Syngenta) pointed out the importance of a strong vision: “The vision has to be appealing, it has to be general enough to trigger emotion. If it is well done, it will re-define what good looks like.”

Geoff Graham (Corteva) reflected on how change is funded in the private sector, usually by reprioritizing resources rather than finding additional funding for change, adding: “The best use of resources is continuous optimization: even if you lose genetic gains for a year, always play the long game."

Finally, Stella Salvo (Bayer) re-emphasized the importance of management involvement and leadership: “Looking back on those situations where we have taken disruptive change, typically that decision is top-down.”

A common theme was that CGIAR centers cannot deliver on the vision alone. In one of the meeting highlights, a panel of leaders from NARS breeding programs in Africa reflected on their growing capacities and role in the future. “Going forward we must cherish equal partnerships,” said Yonah Baguma of the Ugandan National Agricultural Research Organization (NARO). “We must sit at a table and design together. We must have a common, well-defined focus.” 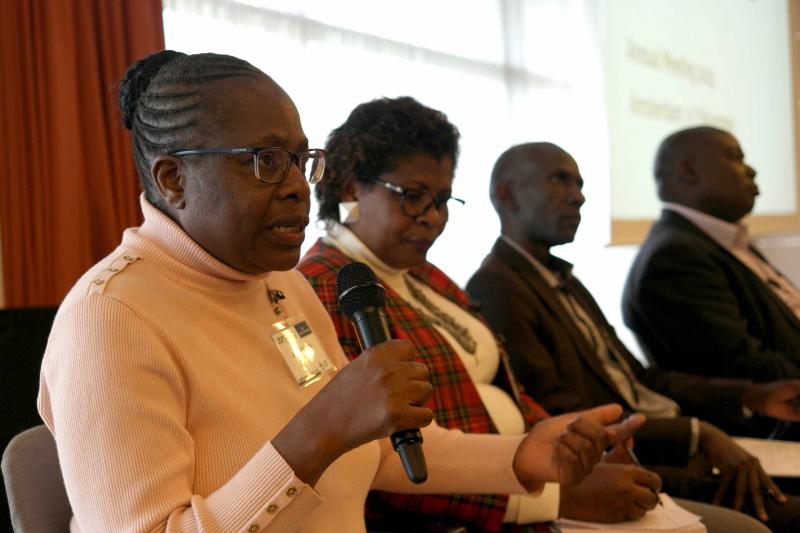 Joyce Malinga of the Kenya Agricultural and Livestock Research Organisation (KALRO) added, “It’s not just having NARS and CGIAR, but also private sector seed companies sitting at the same table to agree on what is going to benefit the farmers. We all need to be passionate about that change.”

EiB product design and management lead George Kotch then introduced an example of how this can work in practice, in the form of an annual product advancement meeting that brings technical experts and stakeholders in the breeding system to make collaborative decisions on how products. Using a role-play exercise, breeding team leads explored how these meetings could be introduced to drive change in their individual breeding programs, and discussions focused on how to get the necessary socio-economic, gender and market data needed to guide product development towards varieties that farmers will adopt. 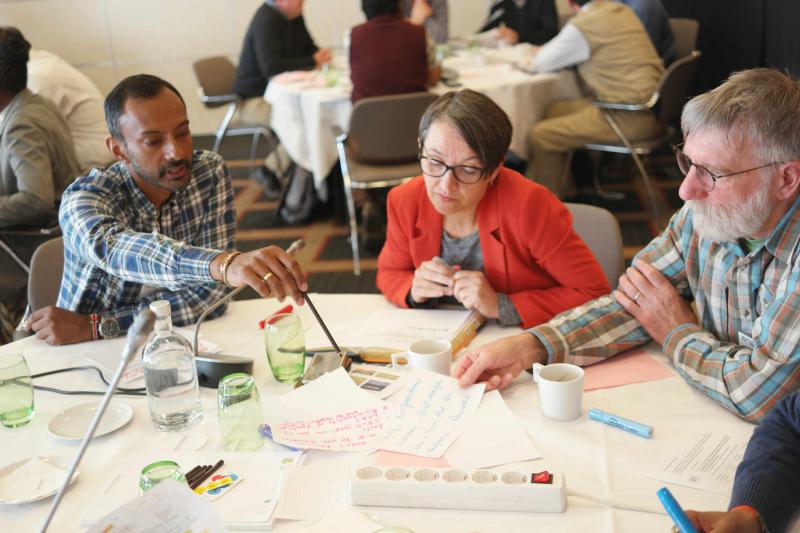 Finally, break-out groups analysed opportunities to develop shared services across CGIAR and NARS to provide more comprehensive and cost-effective support in areas such as genotyping, phenotyping and biometrics, and on key activities that should take place within Centers and with EiB support over the next year.