As breeders strive for higher-yielding, climate-resilient and nutritious crops, genotyping is intensifying the speed and accuracy of achieving breeding goals. But new technologies have often been out-of-reach for national breeding programs in developing countries. 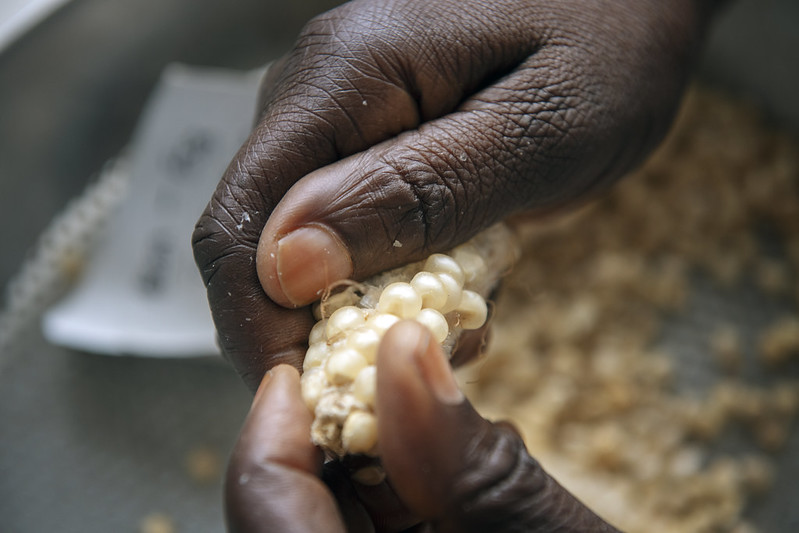 With CGIAR’s strategic approach, this is changing. The application of molecular marker technologies is becoming more streamlined, reliable and cost effective. Collaboration among CGIAR and many African national agricultural research systems (NARS) have resulted in more routine use of genotyping tools to support decision-making – a key milestone towards greater efficiency. With support from CGIAR Excellence in Breeding (EiB), the work leverages the International Rice Research Institute (IRRI)’s ongoing efforts to design reliable marker systems and the analytical support it provides to partners. It builds on significant investments from Bill and Melinda Gates Foundation and others over the past decade.

Breeding pollinations can be challenging – genotyping is helping

In order to avoid self-pollination, breeders routinely practice emasculation in making breeding crosses. But with various logistical and human factors at play, accidental self- or cross-pollinations cannot be completely avoided. Apart from leading to missing breeding targets, advancing false breeding crosses can be very costly.

As part of efforts to support NARs breeding modernization, baseline assessments were performed on 11 national programs working on a range of vital crops in Africa. They identified improving Quality Assurance / Quality Control (QA/ QC) on breeding germplasm as a major priority area. To address this, EiB genotyping services are being deployed to enable NARS breeders to quickly and effectively confirm that self-pollination or unintended cross-pollination did not occur, and that breeding crosses made are indeed the crosses that the breeder had planned to make.

The most efficient way to evaluate the authenticity of a breeding cross or hybrid is to use a group of genetic markers called a QA/QC marker panel. Marker panels are currently available for a number of important crops in Africa and can be used to confirm true crosses derived from different parents, as well as purity of parental material used by the breeder.

In a preliminary screening with a QA/QC panel, three African rice crossing programs discovered some crucial gaps. Success rates for true crosses ranged between 15% and 85%, meaning many breeding populations being advanced were not actually those intended, and were missing vital traits of interest. This baseline information is now being used to support breeding teams to access training and develop strategies to improve their crossing efficiency rate.

Similarly, QC/QA data revealed 22% to 100% genetic impurity in elite maize, wheat and rice founder lines used by six national programs. This means breeders didn’t always use the parents they had intended or some of the parents used in routine breeding did not meet the desired purity level. This often occurs due to improper seed storage leading to mixing or mislabelling, or from field contamination. Now that these issues are identified, EiB and partners are focusing on targeted solutions to help NARS improve their germplasm purity.

Additionally, some of the elite breeding lines analyzed under the QA/QC support are also parents of new and popular commercial hybrids.

NARS programs are also benefiting from the use of genetic markers for forward breeding and selection of parents. By screening their elite breeding germplasm for a set of markers targeting important traits, breeders can generate genetic information describing the breeding material. This helps them determine how ‘elite’ this germplasm really is – do they have the right markers to pass along the desired traits?

Diagnostic markers can be used to confirm the presence of desirable genes in breeding populations. It can also help with selecting parents for new crosses. Or it can track introgression of specific traits into new genetic backgrounds by marker assisted backcrossing (MABC). Using markers is often cheaper and faster than selecting based on field observations, particularly for difficult to phenotype traits that are environmentally dependent.

“The markers are helping us incorporate resistant genes for RYMV and blast diseases into four popular aromatic rice varieties in Ghana,” says Dr. Maxwell Asante, rice breeder with Ghana’s CSIR Crops Research Institute. “In only two years, we developed lines with genes that protect the crop against the two diseases and also have desirable grain quality traits such as aroma and soft cooking texture. The speed, selection accuracy and cost effectiveness that the marker technology has brought to our program is priceless.”

As well, for the first time, elite maize lines have been profiled for major quality and defensive traits, especially disease resistance.

EiB has been coordinating and supporting the use of genotyping by NARS, and has launched new services for national, CGIAR and other breeders. The funder consortium Crops to End Hunger (CtEH) has requested programs to accelerate their rates of genetic gain, and reach those gains more efficiently. To support this goal, EiB coordinates shared services among CGIAR and NARS partners.

“The genotyping operations supported by automation not only simplified the services but also led to drastic reduction in cost per data point because of shared services,” says Ana Oliveira, EiB’s genotyping coordinator for Africa.

EiB recently launched centralized Low Density SNP Genotyping Services (LDSG), along with training and mentoring. This follows the 2020 launch of the Mid-density SNP Genotyping (MDSG) platform which provides low cost and highly scalable services. These growing services aim to meet the increasing demand for DNA profiling and spur the mainstreaming of genomic selection in CGIAR and NARS breeding programs.

“Now that NARS can finally access these new technologies, they are primed to really optimize their operations,” says EiB NARS coordinator Bish Das. “We see our national partners becoming extremely effective and competitive as they use this new data to make better and better decisions.”