The Low Density SNP Genotyping Services (LDSG) provide breeders with streamlined and centralized services, along with training and mentoring. The services offer various applications with the potential to accelerate the production of improved varieties and create efficiencies in crop breeding programs. Breeders can access services to help them with technical tasks such as trait specific selection, background recovery, varietal characterization, diversity, and quality assurance (QA) and control (QC).

Advances in genomics provide new opportunities to accelerate gene and trait discovery – and enhance breeding outputs. Genotyping can accelerate the rate of genetic gain and reduces the cost per unit gained. This has been long demonstrated by multi-national breeding companies. But public breeding programs and national agricultural research services (NARS) have not always had access to the best services in the most efficient ways. And smaller breeding programs may not have the know-how or sufficient demand for genotyping to be beneficial and economical.

The LDSG reaches those breeding programs by aggregating their demand to negotiate competitive genotyping prices with vendors, using one efficient, centralized administrative and contracting process. 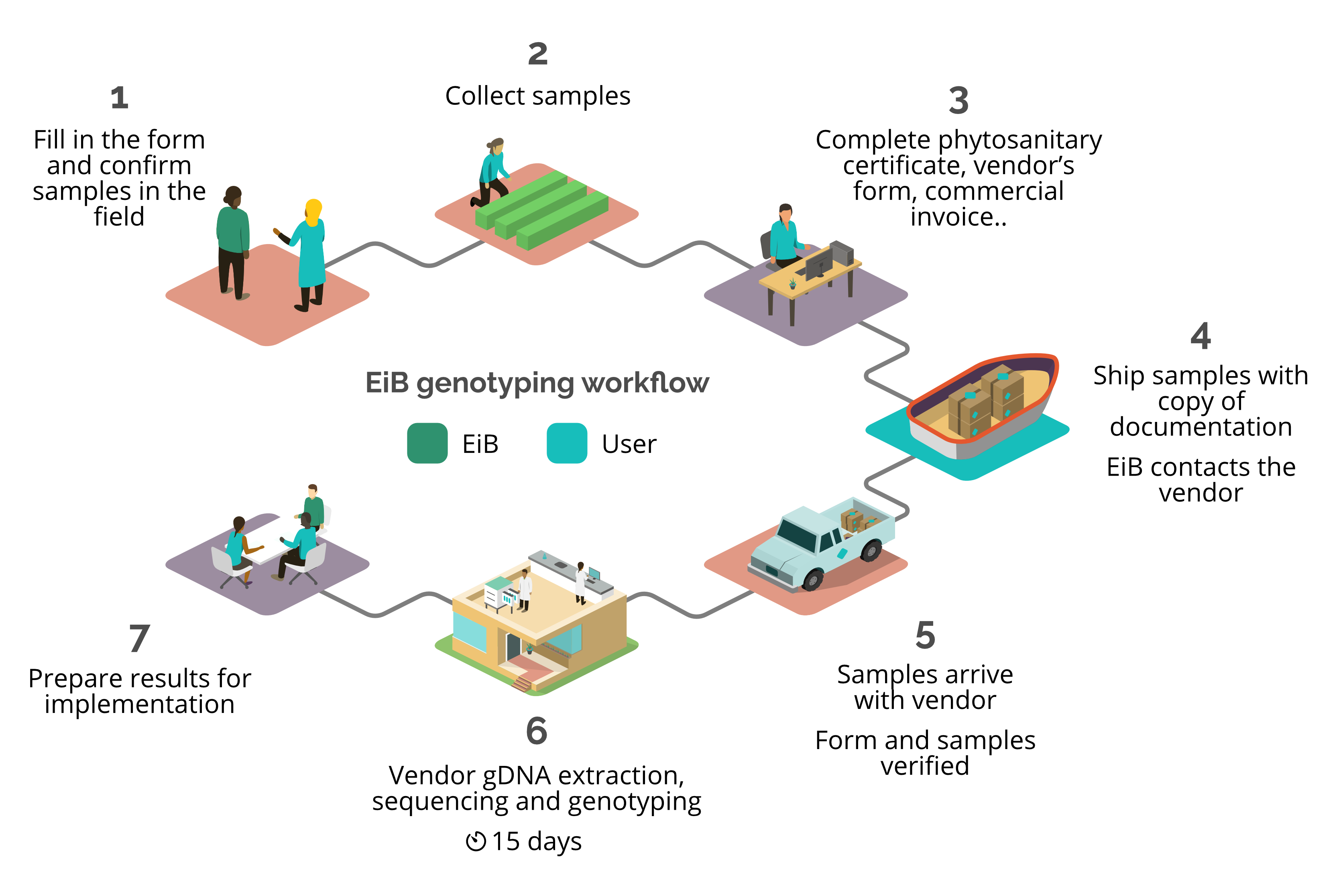 Tools already available for users of the service include a Low density KASP and Mid density marker EiB ‘database’, which is continuously updated. Low-KASP genotyping is highly specific to a target and can be used for QC analysis, dropdown selection, marker assisted selection as well as forward breeding. Here, the markers are known, validated and in use. Compared to other methods, KASP is cost effective, has a short turnaround time and has a low error rate.

The new services continue and extend those previously provided by the High Throughput Genotyping (HTPG) project. Any breeding program can make use of the new service, with EiB coordinating support and implementing measures to minimize direct and indirect costs. Pricing of the services depend on if the requesting institute is public, private, CGIAR and/or a NARS partner. EiB also provides e-learning tools and tutorials to facilitate use of the shared services. Regional workshops are also planned for 2021.

The genotyping services are part of the One CGIAR effort, where EiB is supporting reforms that help raise CGIAR breeding beyond any one crop or center. This will allow for consolidation of labs and functions with the expectation of reaching lower cost, higher quality support services, larger populations supported, higher accuracy, and greater genetic gains delivered to farmers.

“One CGIAR offers us an opportunity to really professionalize, strengthen and centralize these types of services across crops,” said Gary Atlin of the Bill and Melinda Gates Foundation in his remarks at the launch event. “It's very exciting to be at the start of this process and to be to have a couple of excellent examples like the genotyping service to use as our guide.”

One CGIAR-aligned initiatives such as EiB’s genotyping services aim to achieve specific goals for all CGIAR targeted crops within a region, with a particular focus on Africa and South Asia. Development of centralized operations and services means increased capacity can benefit multiple crops and centers. Other similarly centralised breeding services being developed by EiB include phenotyping operations systemization and procedures; soil testing; and health, safety and environmental support.

“Shared services mean a leap forward for CGIAR and NARS breeders. And the launch of the genotyping services demonstrates the power of both leadership and partnership in working toward breeding program modernization,” says EiB’s Genotyping module lead Eng Hwa Ng. “This work would not be possible without the outstanding collaboration and support of all partners, donors, and vendors.”

Written by EiB Communications lead Adam Hunt. This article reflects the information and views of the authors and speakers only. EiB and partners are supported by CGIAR Trust Fund Contributors and the Crops to End Hunger initiative, via the Bill and Melinda Gates Foundation, GIZ, BMZ, USAID, UK Aid, ACIAR and other partners.