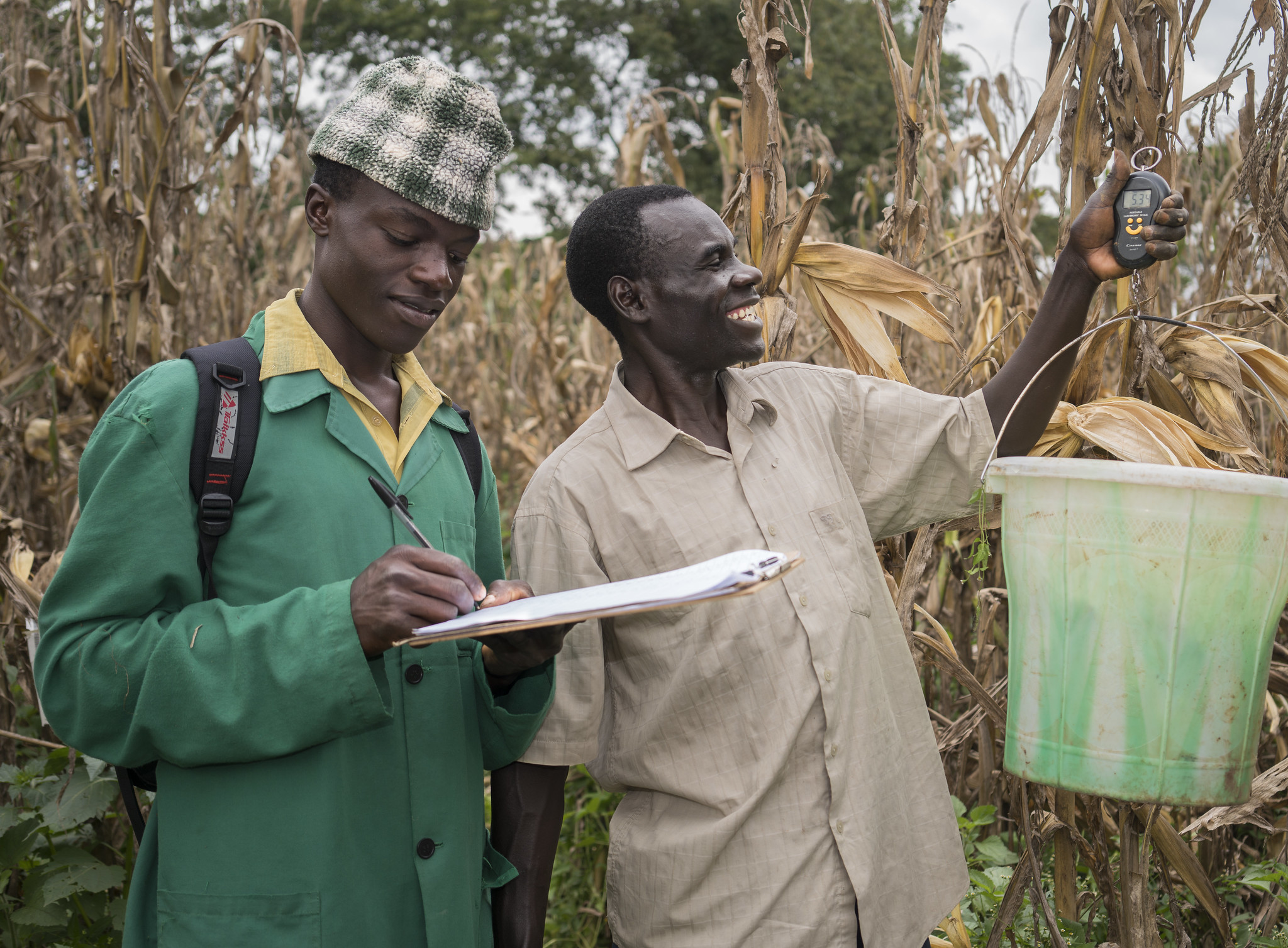 A quiet transformation is underway at the Kenya Agriculture & Livestock Research Organisation (KALRO). New facilities are being developed, flows of digital data are coming online, ways of working and partnerships are being redrawn. All this, as part of a new way of investing in crop breeding research in a bid to finally end hunger in the region.

Over the last two years, the CGIAR Excellence in Breeding Platform (EiB) has made in-kind contributions worth around US $340,000 to the KALRO maize and wheat breeding programs, thanks to funding through the Crops to End Hunger (CtEH) initiative. Just as important as these investments are the changes that enable them, along with the new priorities and cost savings that result.

Joyce Malinga, KALRO director of food crops research, highlights the adoption of product profiles that are used to guide the development of new varieties that meet the needs of farmers and seed companies as one example. "We have been able to bring on a multi-function team that allows you to look at the whole value chain, from the breeder to the consumer, including social scientists, nutritionists, pathologists, agronomists and, of course, the agronomist."

The first step was to undertake a full assessment and costing of the KALRO breeding program, which identified high-impact improvements such as equipment to digitize manual work, investment in irrigation and disease screening facilities, access to genotyping services, internet upgrades and adoption of data management systems.

According to Dickson Ligeyo and Godwin Macharia, maize and wheat breeders at KALRO, simply documenting the costs of the program was a vital step, and the basis for more transformative change. "Reviewing the methods used in breeding wheat in KALRO might invariably help in better allocation of breeding resources, including germplasm and technicians' time, in the context of the ultimate goal of KALRO’s wheat breeding program," said Macharia.

Labor was found to be a major source of cost for the breeding programs, which could be made more efficient through subcontracting field services, or through digitization. "We count seeds manually, we also write labels using pencils or pens, and then by harvesting you find that the writing is not there," said Ligeyo.

In May 2021, KALRO received seed counters, label printers, handheld data collectors, tablets and seed package printers. Not only is the current data generated by KALRO now digitized, but all past data has also been uploaded to the cloud-based Breeding Management System (BMS). Since 2020, all KALRO breeding trials are managed from the BMS. Since crop breeding is the science of taking good decisions over time - which plants to cross, and which progeny to select from - access to historical data is essential. "If an old breeder like me goes away, if you have not been keeping good records, the data goes away too," explained Ligeyo.

To make the digitization of KALRO possible, EiB turned to Stefan Einarson at Cornell University, who specializes in bringing better internet access to remote institutions. Access to the KALRO research station at Kiboko, Kenya was blocked by the Mombasa Highway, part of the 485-kilometer Great North Road that connects Nairobi and five land-locked countries to the coast, carrying 50% of all goods traded in East Africa. Whereas previous Einarson solutions have used complex microwave arrays to carry broadband internet, in this case a fiber-optic cable was tunneled beneath the highway.

According to Einarson, it was worth the effort: "We were able to bring down the cost of internet and increase the amount of bandwidth available by perhaps orders of magnitude." As the KALRO research stations at Kiboko and Njoro are shared with others, the internet upgrades benefit multiple organizations and allow for better data sharing with partners such as CIMMYT.

Wi-Fi is being made available to connect the new tablets and field data collection devices to cloud databases, and Einarson remains involved to track progress, ensure the infrastructure meets new demands and train staff. "Whenever we put this in, we also do training with people that are local, so that they can take ownership. We meet on a weekly basis over months, and people are involved in every decision so that they know how to operate the networks once I am gone," said Einarson.

Hybrid maize breeding involves taking maize plants with well-known genetics, known as "lines", and combining them together to create new varieties with the qualities needed by farmers.

During the costing of the KALRO highland maize breeding program, it was found that around 70% of spending went towards traditional line development: advancing generations annually for almost a decade. Meanwhile, partners like the International Maize and Wheat Improvement Center (CIMMYT) have established centralized Double Haploid facilities in eastern Africa that dramatically reduce the time required to generate fixed lines to two years at a fraction of the cost of traditional line development. By outsourcing line development to CIMMYT, the KALRO maize breeding program can triple the number of hybrid varieties it evaluates and can invest more in bringing them to farmers.

Access to the EiB shared genotyping service also revealed that the maize lines in use were not as genetically pure as thought, making it harder to develop strong varieties. Plans are now being developed to purify key maize lines in KALRO and also use the genotypic data to identify lines that have resistance to diseases like maize lethal necrosis, leaf blight and aflatoxin. The wheat program has also started to use genotyping to identify potential crosses.

KALRO's research stations also offer good conditions for environmental and disease stress testing. Now that the true cost of operations is known, this can be offered as a service to other organizations who wish to test the performance of their varieties in the field, otherwise known as phenotyping. "KALRO plays an incredibly important role in regional crop breeding networks throughout eastern and southern Africa in collaboration with various CGIAR centers and national programs," said Biswanath Das, who coordinates EiB activities with national agricultural research and extension systems. "KALRO’s current efforts to modernize breeding operations and infrastructure will therefore benefit the entire region through establishing regional centers of phenotyping, good practice and excellence."

Taken together, the changes underway add up to something greater than the sum of their parts: a modernization of all activities at KALRO that has a broader impact on crop breeding networks in eastern Africa. With funding from Crops to End Hunger, EiB is applying this approach in a range of countries, from Ghana to India, so that farmers have access to stronger crop varieties that will be appreciated in local markets.

However, much of the impact of the EIB approach is found in greater efficiencies and better prioritization, as Ligeyo explains: "The quality of the varieties going to farmers will now be better, but one big problem is that we always develop maize hybrids, but don't have a plan to promote them to farmers. Since we have decreased the funds in line development, we will use them to create new varieties, and in promotion so that we can see increased adoption by farmers."

With more technologies and skills involved in crop breeding, Malinga is also looking forward to seeing the contribution of a new generation of scientists and technicians: "I would love to see, 10 years from now, whether young women get into this and take on the challenge, because a lot of it is hard ICT programming."

“Crops to End Hunger aims to redirect investment towards two clear goals: faster development of crop varieties that reflect farmers and markets’ needs, are more nutritious, provide a higher income and are better adapted to climate change, said Sarah Schmidt of GIZ, the German development agency, which is one of the main funders of CtEH. “Ultimately, by upgrading breeding programs from top to bottom, we aim for big impacts – improving nutrition and rural livelihoods, enhancing resilience to climate change and making improved varieties accessible and affordable for small scale farmers to allow large scale adoption.”

Story by Sam Storr, EiB Communications Consultant. Contents reflect the information and views of the authors/quoted individuals only. EiB and partners are supported by CGIAR Trust Fund Contributors and the Crops to End Hunger initiative.